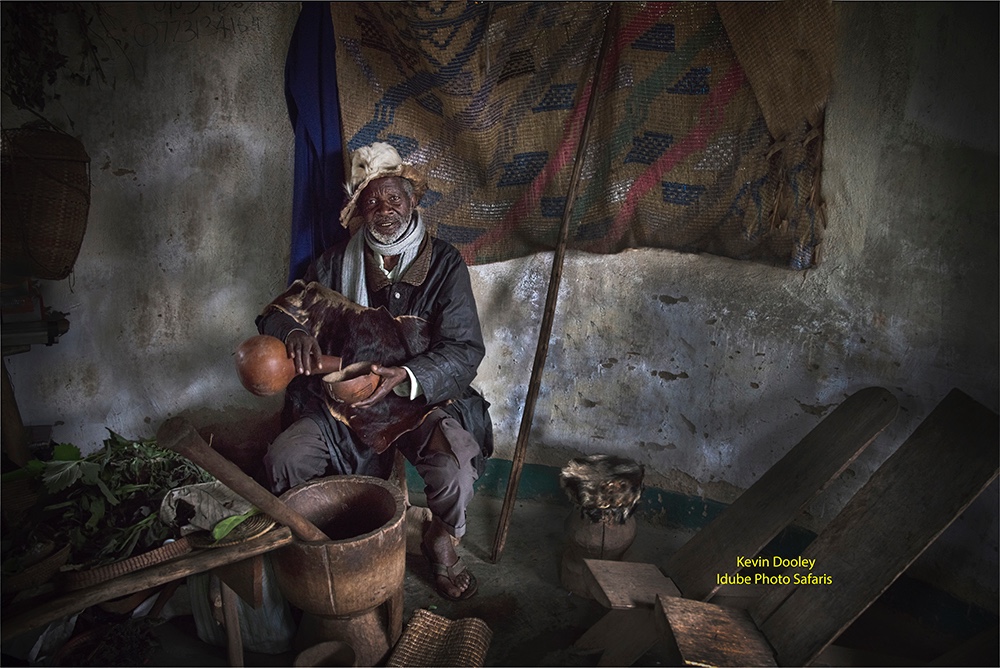 My rain gear is on and I decide to just take one camera, my 5D and one lens, my 28-300 Canon L lens. No need for a big telephoto lens for this village experience. My 28-300 is perfect for this type of photography, a nice wide field of view at 28 and a perfect portrait lens at 300, with a wide range in between. I like the 5D for portraits, especially for subjects with amazing character and years of life’s stories written like a road map upon their face. My only concern is that it is a bit dark in the interior hut and the 5DS has a lot of noise at higher ISO’s. I also packed my reflector as I am hoping to get some reflective light on the medicine man. It is a small portable reflector and it does the trick in a pinch.

The walk up the side of the mountain to the local village is quite a muddy journey. The pathway is lined with yellow and green tea plants and huge banana trees. The faint view of mud huts with their banana leaf roofs is growing more and more present as we walk closer. My excitement is heading for a peak that I only reach when I am about to create some amazing, once in a lifetime images. I see a shadowed outline of a character that I know is going to be amazing to photograph. With a quick introduction from my local guide, I am invited to the one-room hut that is decorated with all sorts of dried grasses, plants, woods, and gourds. The only other items that catch my attention are the homemade tables and chairs and a few old ripped out magazine articles about President Obama that are somehow stuck to the wall. The smell is dark and musty, not a bad smell, in fact somewhat similar to that smell of old sweaters and furniture at your grandmother's house. I fire up my GoPro and proceeded to ask all the questions that one might ask a medicine man. 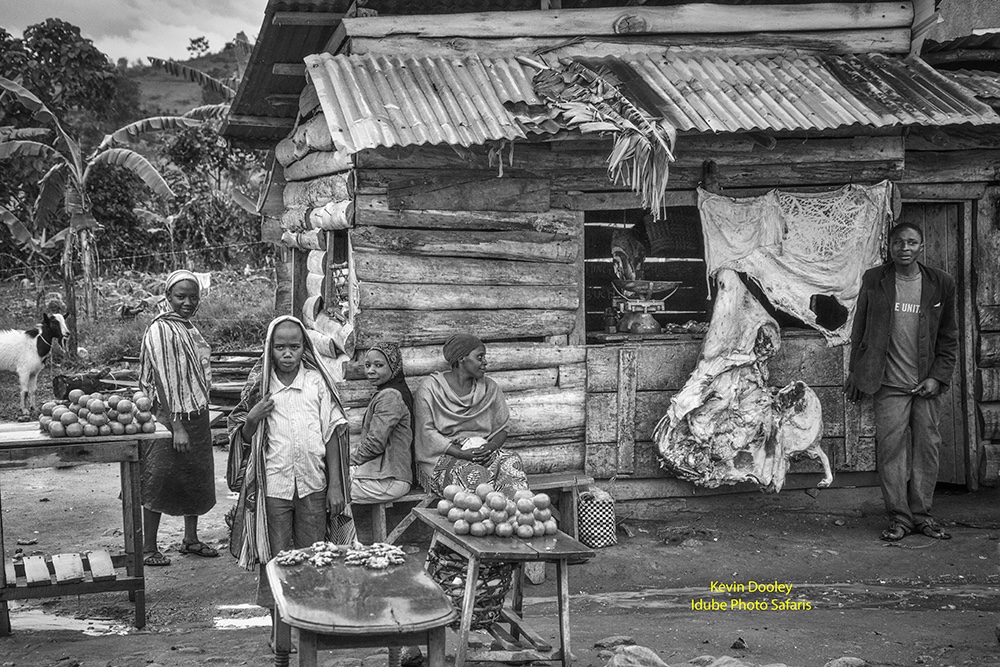 The medicine man has a very dark complexion and his white hair is a bright contrast against his dark skin.  He has a shaggy and rugged beard. His eyes are old looking, slightly hazed, and completely full of wonder and wisdom. His eyes are held by a sagging and rough looking skin, with a stare of invitation. His teeth are showing signs of many years of use, stained and ground down. His clothing is ragged and torn, a black weathered jacket stained with unrecognizable spots and soiled by many years of constant use. A grey wool scarf tattered and full of different sized holes keeps his long and thin neck dry and warm from the constant drafts and dampness of the mountain rainforest. The medicine man proudly wears a homemade goatskin hat with white and tan fur still attached. The hat is hard and brittle because the goat leather was not been completely tanned. His long and dark pants were worn thin and stained. His shoes deteriorated and old from the many many miles of walking, speckled with deep red mud. He uses a walking stick made of hardwood and decorated with simple carvings. A complete package of pure photographic opportunities. 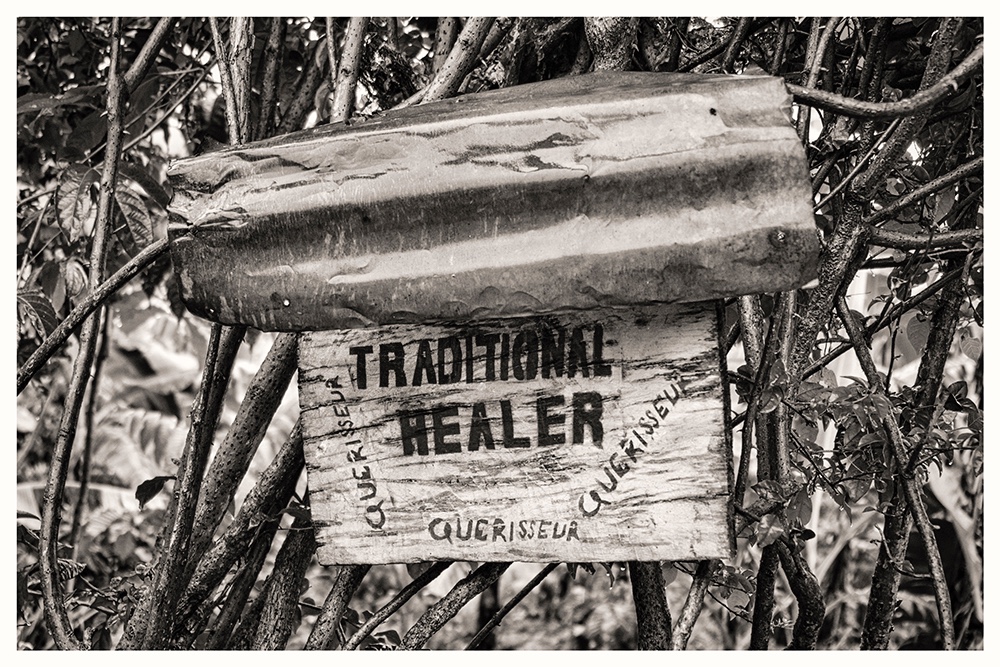 My interpreter was a very kind and willing assistant, a local community guide named Smith. Smith is his Christian name, as many of the local people have been born again into the Christian faith. A common practice in this area is to be given a Christian name. Many missionaries have done mission trips to this part of Uganda. The newly built Christian churches really stand out as they dominate the other structures of decaying shacks and one man shops. I wonder what enters the local minds as they step from a decaying mud brick and straw house into a well-built church. Many of the local people have proven themselves by showing their new faith through a baptism. Their original tribal names are also held onto and used mostly when among the tribal people. However, using the new Christian name is common, especially when being among westerners who can have great difficulty pronouncing the tribal names. 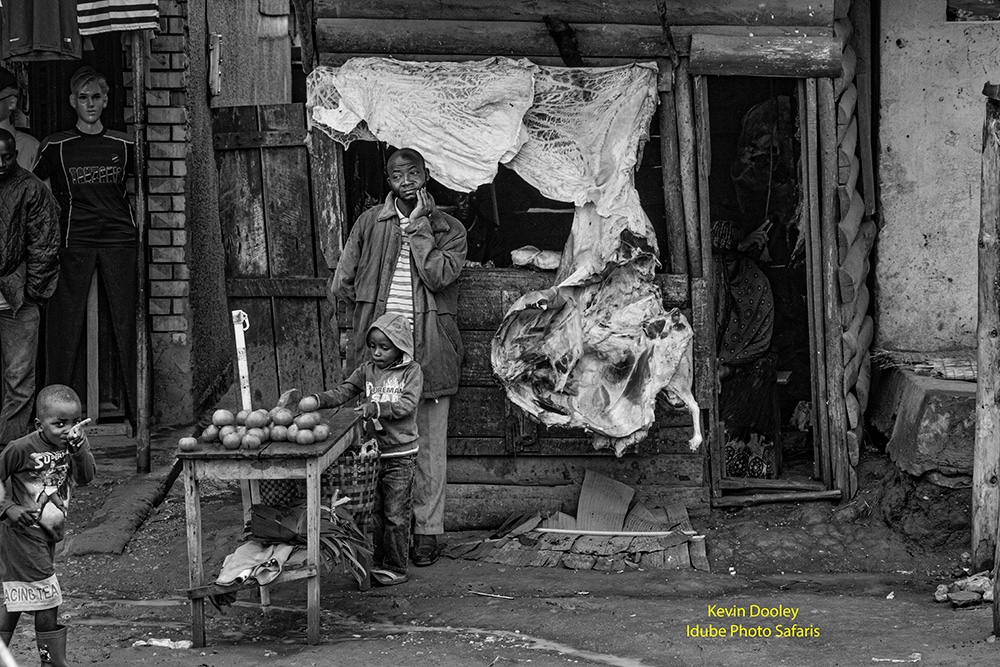 I had many questions for the medicine man but, with every word having to be interpreted and repeated in English, I kept it to the most interesting questions about his native genius. I also need at least 15 minutes to photograph him and did not want to keep him from his work of healing the local folks for too long.

I found the question of how he became a medicine man to be of extreme interest. The standard answers of where he went to school, where he got his Ph.D., and where he completed his residency were, of course not a part of his reply. No, his answer was far more interesting than a list of high tech schools and grade point averages. This medicine man was born into a family of many generations of medicine men. He was selected by a much bigger source and spiritual faith then any of us modern day scholars can ever understand. Decades ago this family was chosen by some supernatural source and it is this family’s responsibility to continue the healing of its people for the generations to come. In fact, his grandson was in training to take over his position soon, being 77 years old, this medicine man will retire from his position and become a mentor to his grandson. Special cases such as mental illness or an extreme snake bite may require additional knowledge from this highly respected old timers advice. 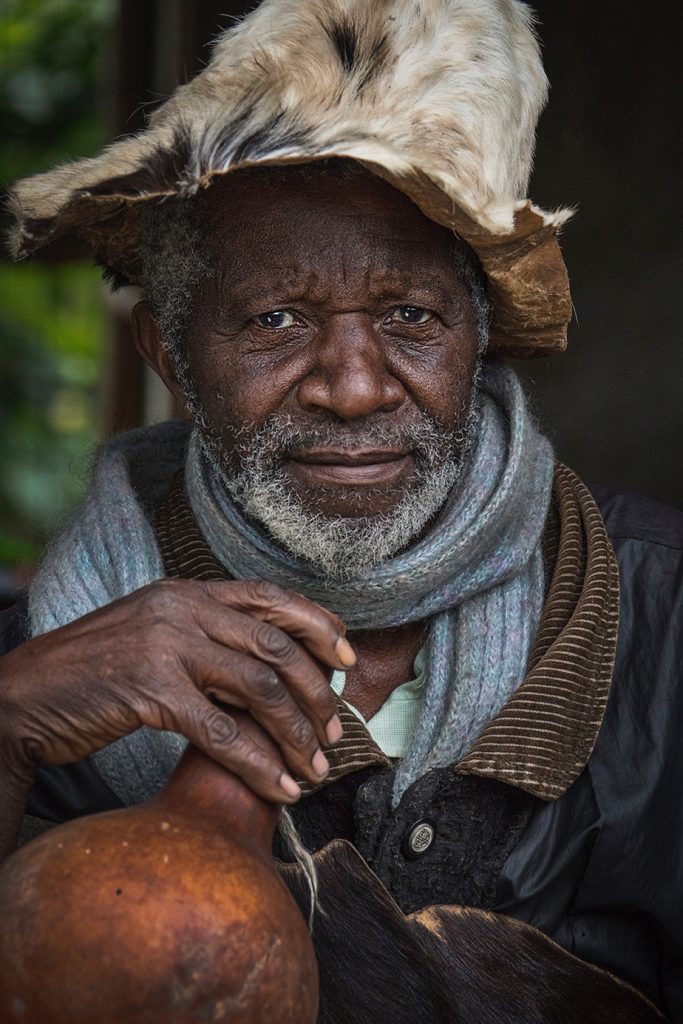 Like a game of charades, I found myself guessing the ailment he would be cured as he spoke and gestured about various leaves, bark, seeds, and twigs. He crumbled and added unidentifiable liquids into half cut gourds. He swirled and mixed the concoction and then gestured pouring it down the hatch or rubbing it onto some unexpected body part. All this was followed up with Smith giving me his English interpretation of stomach ailments and sore muscles. My favorite explanation coming from the medicine man was his long and highly expressive cure for vomiting and loose bowel movements.  All this leading to a big smile and a sigh of expressive relief. I did find it quite interesting that every one of the many health issues I asked him about, contained a cure in the combination of exotic looking goods that lay upon his homemade table.

It was time to photograph this fine gem of father-time. I really wanted show the finer qualities of a tough life in the mountain rainforest of Uganda. The years of a hard and traditional life are written all over his face. However, I also wanted to show what he was all about, where he practiced his homemade medicine and the tools of his inherited trade. 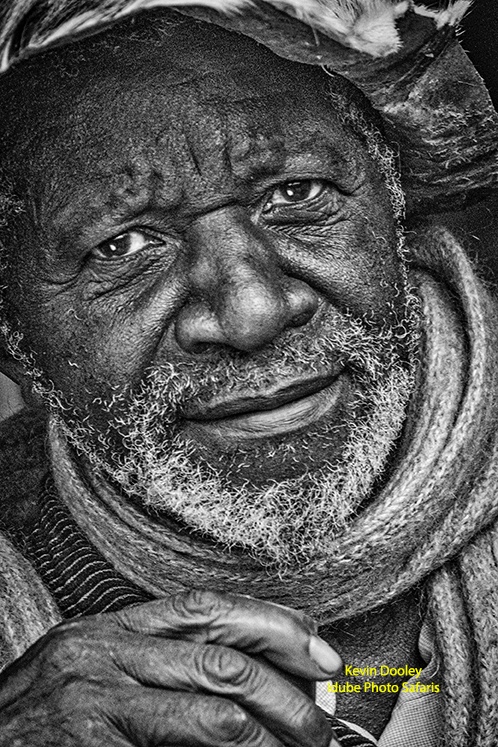 I had some huge difficulties to overcome. Mainly it was the weather that would present me with these challenges. The ever constant drizzle and seriously overcast sky were the presenters of extremely dim and nonspecular lighting. Not my favorite choice for an image that should be full of expression and portray the contrast of emotions through the highlights and shadows. I had a complex situation of a subject that was much darker than the muddy white walls that surrounded him and basically no light to fill in the blanks. The obvious choice of adding fill flash was for me simply out of the question. I could not find any part of me that would except artificial light added to a scene completely made up of natural elements. I do not even carry a flash with me for the temptation would be there to use it. Therefore, I can take the natural light and add a bit of a punch to it with a reflector, giving me the same lighting that would exist on a sunny day. I keep two reflectors in Johannesburg South Africa, at my sister in laws home, both are inexpensive light-weight, small, 36-inch reflectors. They are easy to transport and small enough to fit folded up in my camera case. I use the gold/silver combination where the silver gives me a bit of gusto and the gold a bit of warmth. These are basically smaller and less expensive versions of the 50 plus inch reflectors I use back home in the states for weddings and portraits. I was going for a strong lighting ratio. I wanted a dramatic look to the image and if I could pick up a few specular highlights on his face, well all the better. I wanted the medicine man to be the main subject, with his environment supporting his story. So more light would be required on his face than any other area of the image. Basically, I figured out two ways to accomplish this. One method would be to have Smith hold the reflector outside and reflect light onto the medicine man's face, letting the light spill onto the wall. In turn, reflecting the light back onto the shadowed side of his face. This would give me a 2-3 to one lighting ratio and provide some specular light on his face, giving me some key highlights in the eyes. A problem develops with this system, I will end up with a bright hot spot on the wall where the light is hitting and bouncing back onto our doctor. 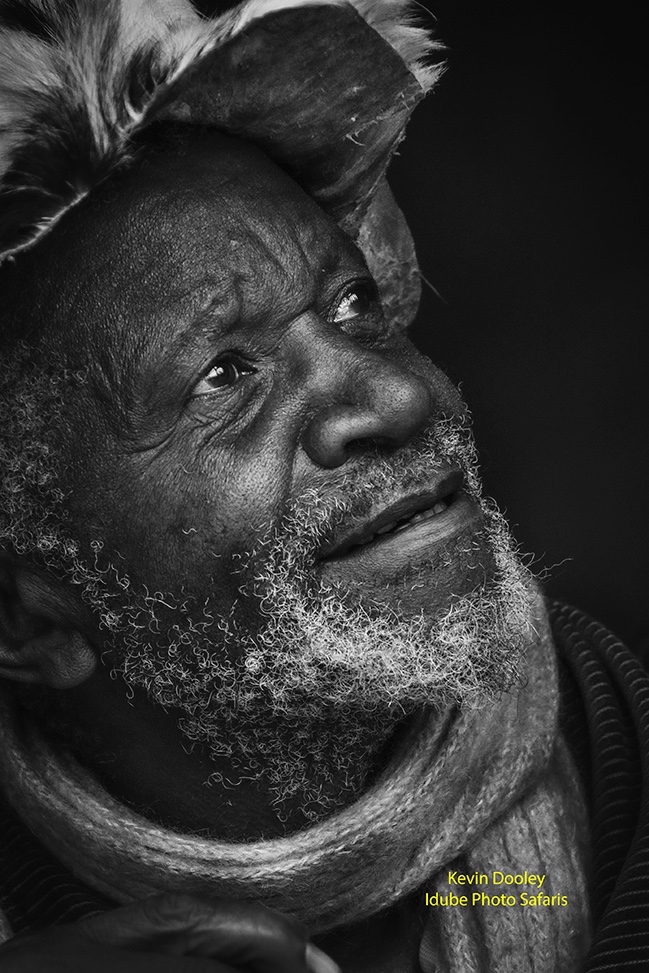 Option two seemed a little bit tougher to pull off but, would be more precise in achieving the lighting effect I was trying to achieve. By placing Smith just outside the front narrow entrance, the only entrance into the shack, I was able to get just enough light to reflect back into the darkness and onto our medicine man's face. I took a few moments to teach Smith the use of the reflector. He picked up on the technique and managed to hold the reflector at just the correct angle in order to maintain the natural light. Another important part of my instructions to Smith was to keep the reflector high enough so that all the shadows produced by the additional light would fall behind the subject and not become distracting or unnatural looking. I then turned our practitioner's face to one side. I lite one side of the face more than the other, giving me my desired lighting ratio and creating the desired impact. Once completing the environmental portraits, I move on to a close-up head and shoulder type image that would explore the shapes and expressions of his face without the distractions of his surroundings. These images show his story through the expression and details within his face vs the environmental images that tell his story through his surroundings.