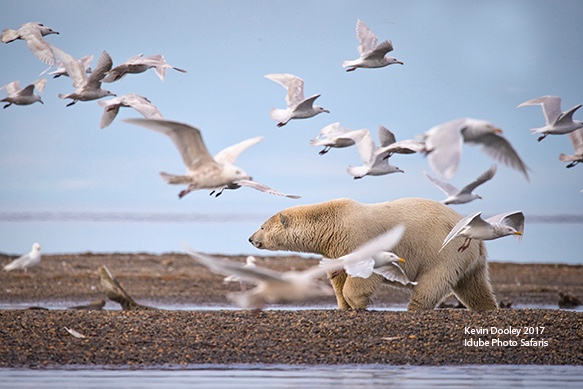 Today I find myself flying over the Arctic nature refuge . The brown tundra is fitted with a massive mapping of caribou trails and winding rivers that flow from the Giant snow capped Brooks range and down to the Arctic ocean. The sky's are crystal clear and the visibility is what dreams are made of. Miles upon miles of extreme Alaskan wilderness. Beyond imagination to say the least. Having a bit of experience with Alaska and weather, I realize we are truly truly blessed today. Even Mt McKinley is with in view at over a hundred miles away. 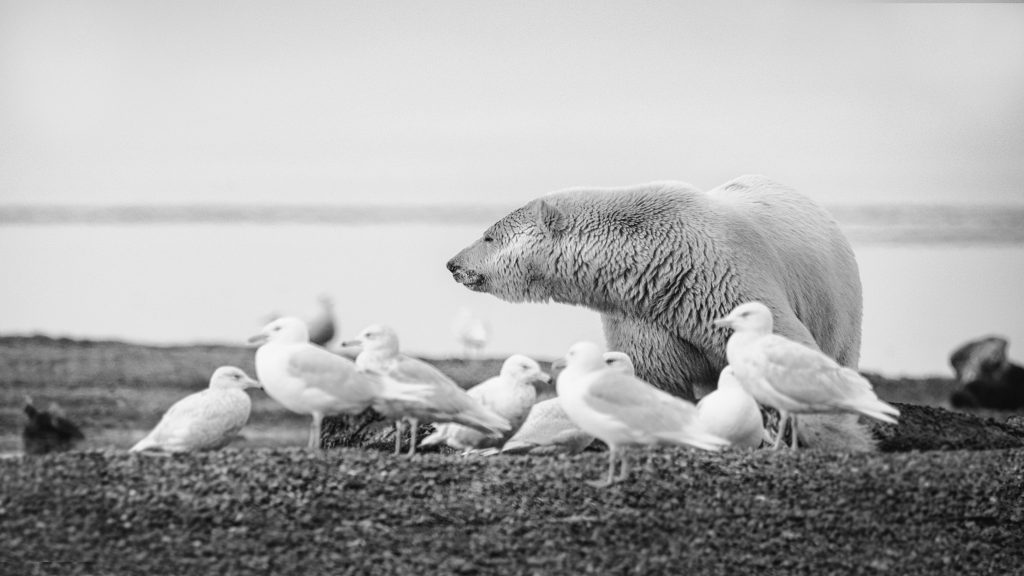 We are now far north of the Arctic circle, heading towards the small village of Kaktovik . Kaktovik is located Basically in one of the most northern parts of the Alaska mainland. Covered in ice and snow most of the year, this small village of approximately 300 Inupiat people sits on a small Chunk of land known as Barter Island Alaska.

Surround by the Beaufort sea, to the north, rests the Arctic Ocean, an area that turns to ice and provides access to the many seal hunting areas that the polar bears rely on for winter survival . Miles of Tundra lay to the south and is known as the Arctic National wildlife Refuge, a very important area for the Caribou migration. So yes it is an Island, although to me, from the bush plane, it looks like it's part of the mainland. In route to this remote and special place our bush pilot points out some historic facts, the lakes, peaks, and Rivers. 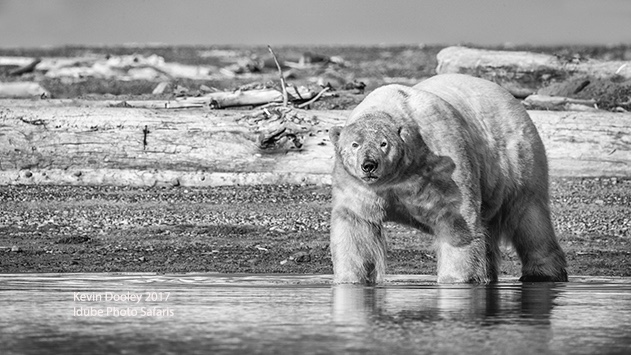 This area is littered with stories of the gold rush and the many miners that have come and gone. Most of these adventure seeking gold diggers only ended up spending a year or two in this harsh and brutal land. Going home with little to show for the effort and enduring the relentless cold and wet. The gold rush was short lived and the mostly abandoned wilderness towns and camps that dotted across the wilderness are pretty much gone. However a few remain such as Livengood and Coldfront.

The mighty Yukon river, which will soon freeze over in a few weeks, October , and not thawing till mid may. The Yukon is one of Americans longest rivers, flows from east to west,  winding and rushing like a run away locomotive. This famous and whimsical river is a huge provider of habitat to birds,  mammals and marine life. Grizzlies, Moose, Dall Sheep, Muskox, and Caribou call this place home. 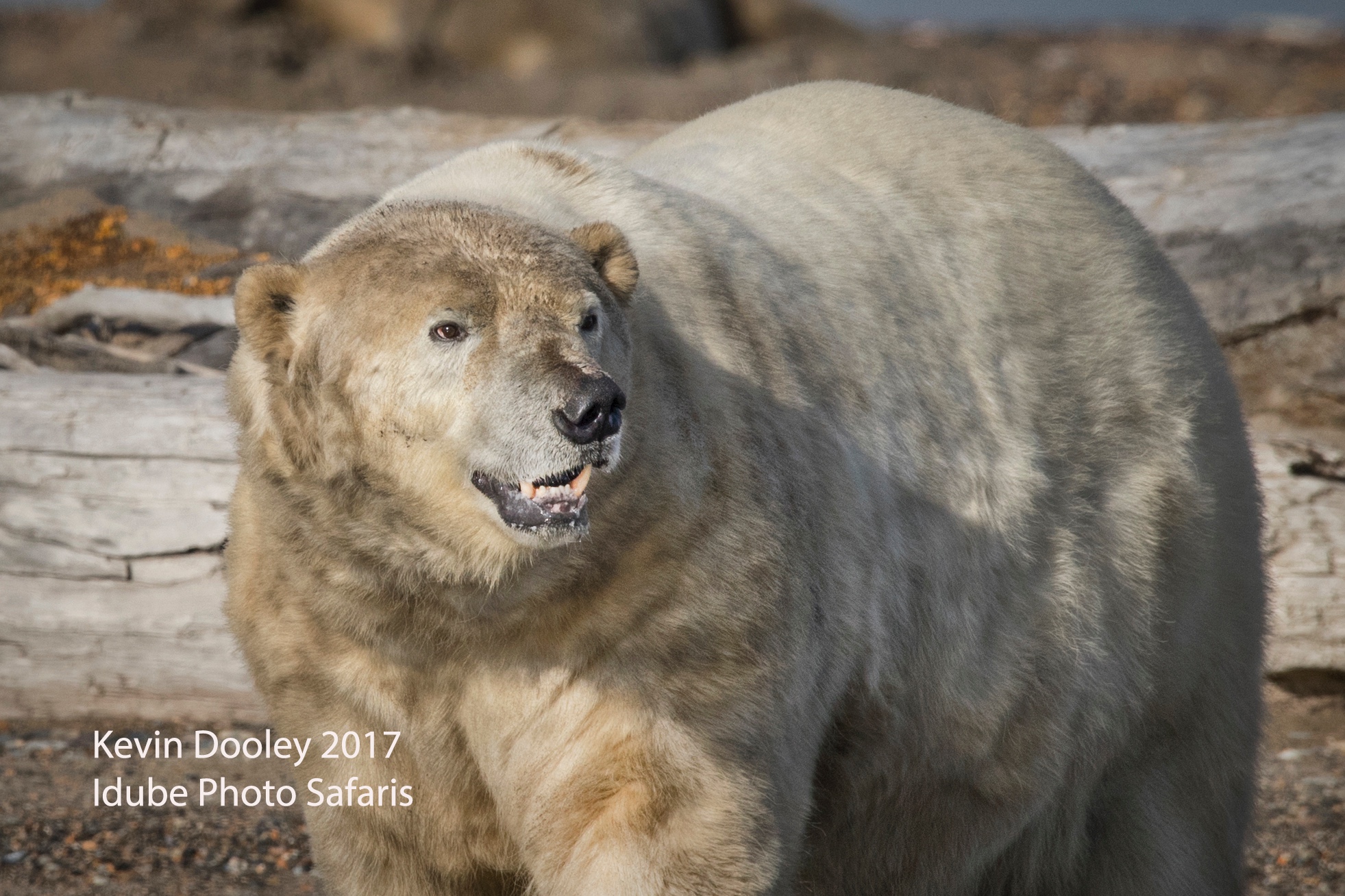 This area experiences brutal weather, winter Temperatures can easily reach minus 30 and lower. These are some tough critters that roam these hills and Tundra. However, maybe not as tough as the biggest bear on earth, today we are in search of the Arctic Polar bear. After a great amount of research and a bit of decision making, I knew where I wanted to photograph Polar bears. I was not interested in looking down on the bears . I was not interested in photographing them through a glass window. I wanted to experience and photograph these great beasts from ground level. Up close and personal.  I am very much a person who wants any wildlife experience to be as wild and as authentic as possible. I share this experience with many amazing people that travel to these locations with me and on my recommendation. An animal that survives in such brutal conditions as the Arctic. An animal that represents the very essence of power and strength. In my opinion deserves to be represented and photographed at eye level or lower. Photography of bears from above eye level will certainly diminish the size and power of these stunning animals.

Of course any wild polar bear viewing and photographic experience is a life changing event that is special, unique, and to be considered as a very special event in one's life. Very few people will ever have this experience and it is one of the most coveted experiences of wildlife photographers. Of course on the bucket list of so many. 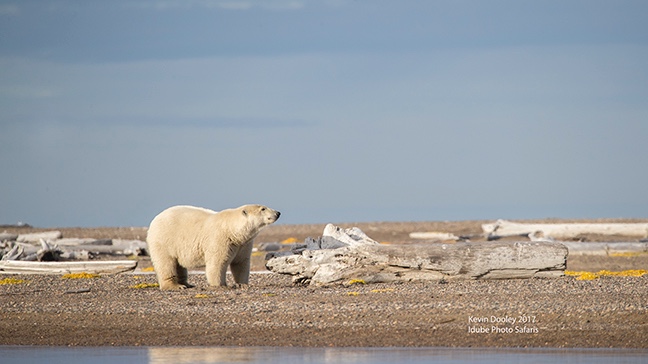 My Grizzly bear area is so good and I was really hoping to find a similar polar bear area. Not easy however, polar bears in the USA are very few and far between.  The next choice would be Canada, however, the convenience of heading to the polar bears directly after our Grizzly trip and  staying in the USA was very appealing to me. Plus, through good connections , I learned of a place where we can get a ground level, more natural experience. Only problem being that the area is extremely remote and expensive to get to.

Day one of our polar bear photography was a stunning day. Unseasonably warm at over fifty degrees, clear blue sky's , and no wind. I was rolling up my shirt sleeves in no time . The bears were actually quite active, which surprised me, with these warm temperatures . I believe they were uncomfortably warm. Several bears were swimming and play fighting, biting each other and pushing each other around like a couple of worn out boxers.  Diving under the water and emerging with huge amounts of the cold Beaufort sea running and dripping from the bears heads. Shaking their heads and bodies in succession , then repeating the process. As if they knew we wanted another chance to get that perfect image. A Fast shutter speed is top priority in these types of shooting conditions. The power and speed of these bears when they shake could easily become a blurry mess of unwanted movement. Fortunately shutter speeds of a thousandth of a second were very obtainable, with 1/1250 th often a possibility. We were blessed with a mostly clear sky, so these shutter speeds were easily maintained with low ISO's of 640 and 800, and f stops with a nice depth of field ratio such as f8.

Day two brought a more expected forecast for the Arctic . A bit of drizzle, temp's below 40, 15 to 20 mph winds, and dark cloudy moisture ridden sky's.  The bears were a bit more lethargic, a lot of sleeping bears. Piles of white and dirty white patches littered the beaches with heads resting on large gray logs of driftwood. Sort of a surprise as I had not seen any trees for at least the last hour of the flight in to Kaktovik. Miles and miles of Tundra broken up by the silt ridden rivers and caribou trails, yes, but no trees, not since passing over the northern edges of the brooks range. Imagine the miles of turbulent river flows, overloaded with a heavy spring run off, that these trees must have traveled. To end up being dumped into the Arctic Ocean and washed up on the sandy gravel bars that surround the shallow continental shelf that supports the ice flow. From the perches of bald eagles and snowy owls to the pillows of sleeping polar bears. Certainly a trees life of honor. 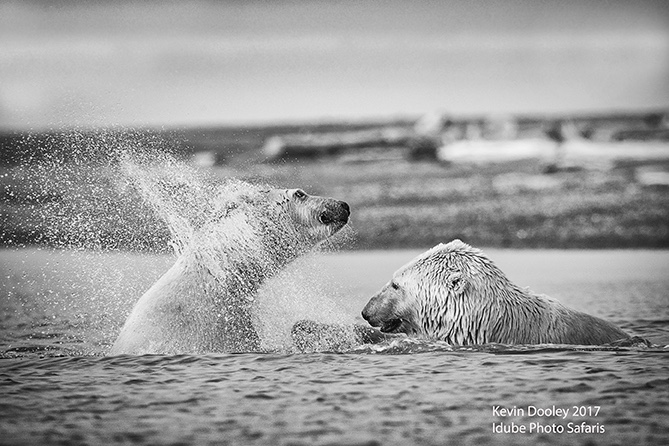 The typical bright white concept of polar bear fur is far from true, at least for this time of year. The bears sleep, roll, stretch, and roam over the beaches. The pure white coats are covered and stained by the brown and gray sand, only to regain the pure white look once the bears have gone for a swim. The older, bigger bears were particularly dark in color, almost taking on the colors of a costal Grizzly. The bigger bears were lazy and had stomachs so stuffed with whale meat that their bellies were just a few inches from dragging the ground. Finding a whales remains is a big deal for a polar bear, especially this time of year. Just like the grizzlies, these bears need to fatten up for the long and arduous winter that lies ahead. Although it is typically only the pregnant female that will go into temporary bouts of hibernation. Unlike   Many other bears, polar bears will remain up and about through the cold polar winters. Hunting the ring necked seals that also fallow the ice flow. In recent times the polar bears have had to resort to other food sources such as whales and fish. The ice flows are forming later and later in the fall, as well as melting earlier in the spring. These bears relay on the ice flow to keep up with the seals and their movement patterns. The seals thrive in this cold water environment where the fish they survive on are very abundant. The bears hunt these seals from the ice where they can pounce on them when the seals surface for air. The seals are too fast for the bears to catch them when swimming. The Barter Island  Island area is one of the first areas to freeze up as it is located in an area with comparatively shallow waters along the costal area. So the bears accumulate in the area as winter approaches. 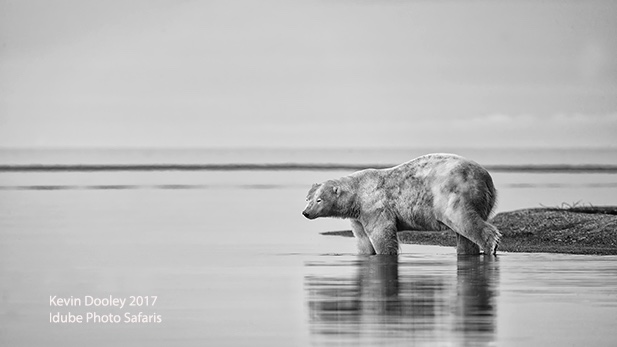 Day two has also brought upon us some very cold temperatures and strong gusts of cold and damp wind. Of the six people on the small boat, only two of us remain outside the warm cabin. The sky is dark and is carrying a lot of moisture. Leaving us with less than ideal camera settings. Having to crank up the ISO to the levels of possible digital noise. 2400 seems to be the minimum I can get away with. Using on the edge shutter speeds of 1/800 to 1/1000 th of a second, not ideal for stopping motion. Selecting f stops with limited Depth of field. Unlike day one, today us all about a bundle of technical compromises and prioritizing artistic choices.

Photographing from the deck of a rocking boat certainly presents its own set of challenges. Tripods are not allowed on these small vessels, however some sort of lens support is of vital essence. Especially considering that, unlike on our brown bear trips, we can not get as close to the polar bears, so a strong telephoto lens is quit necessary. A strong telephoto lens, a focal length of 500 or 600 mm, rocking boats, and moving bears, requires shutter speeds in the 800 plus range, preferred in the over 1000 th range. My ideal shutter speed for this situation is 1/1250 of a second. A bean bag placed on the running rail of the boat is an ideal lens support, however a jacket, or flotation cushion will also work.  It's vital that something is under your lens to absorb the shock of the constant camera and boat movements. The seas in the Arctic can and typically are a bit rough. I find that sitting or kneeling on the boat deck is about the best position, relieving you of fatigue when spending several hours out at sea photographing the bears. It can also take a bit of practice when it comes to the timing of releasing the shutter button. It can be helpful to give yourself a bit if lead time. Once your brain and finger connect and you press the shutter release, it can be too late and you have lost your composition. Another technique that can be productive is to compose your images with the subject in the center and make your compositional changes in post production. However this technique is only useful on higher megapixel cameras where you have a lot of image information to work with and crop. With this technique, most of time you will be able to keep the subject with in the frame, even in a rocking boat. It will take a little practice, however getting the hang of it is not too difficult.

I have chosen this location for many reasons, it has been a fantastic experience for sure. Not an easy location to reach, or an easy location to get the reservations for very very limited available spaces. However worth all the effort for sure. It's on our list for next years bear Safari, I am excited to get back to this arctic polar bear paradise.