The story behind my image in the incredible book Remembering Cheetahs is certainly a day in Africa that I will never forget. 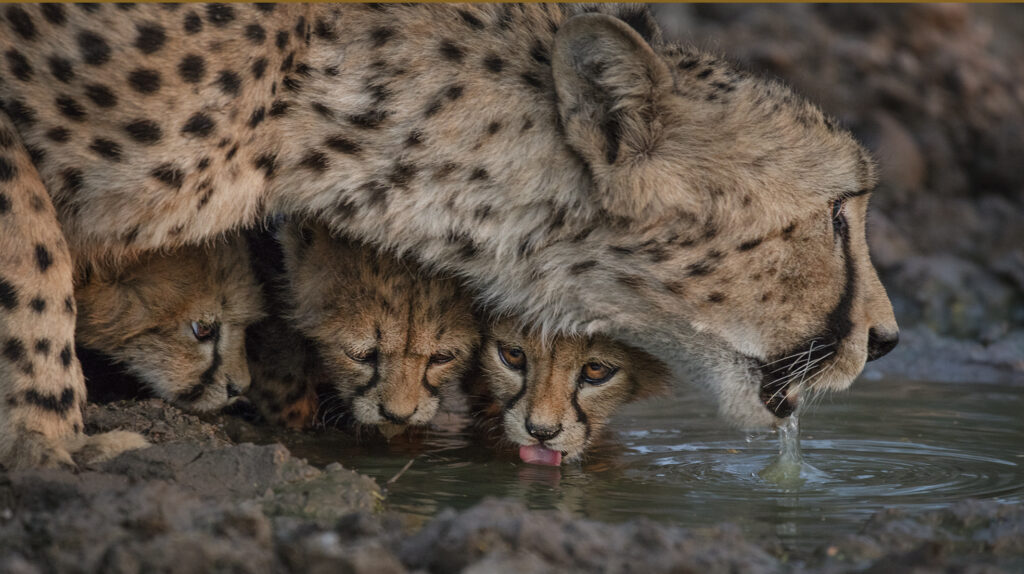 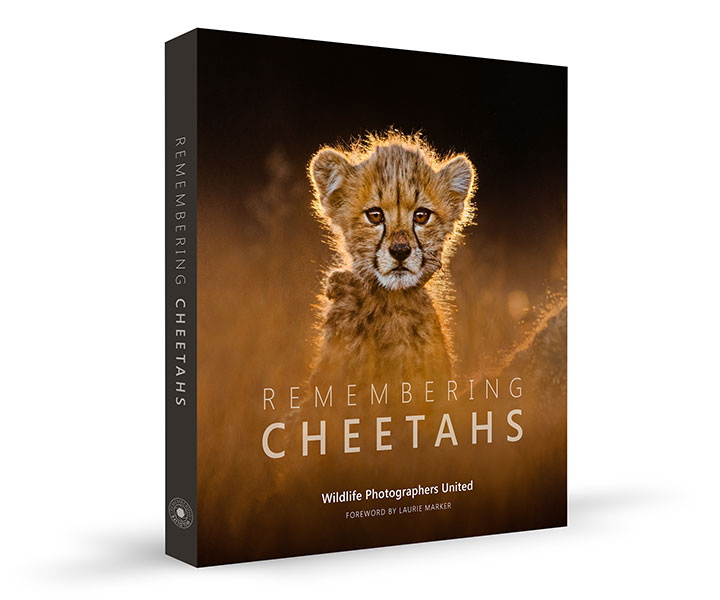 When I was notified that one of my Cheetah photographs was selected to be among the top cheetah images in the world, I was incredibly happy. Along with other top cheetah images, my photograph is now part of a book. This same image took me to the selection of being one of Africa’s wildlife photographers of the year. What an honor to be chosen to help the cheetah remain and grow stronger. Remembering Cheetahs is both a book go stunning cheetah photographs and a strong step in saving these stunning wild cats.  https://rememberingwildlife.com/remembering-cheetah

The soothing coolness of the morning was a much appreciated relief to the relentless Namibian heat. A glance at my phone reminds me of a new day. In the feint light I spot an empty water bottle, sheets on the floor and a rotating fan. All reminders of the desert heat that makes Namibia what it is. Four twenty one AM, I lay in bed knowing that in nine minutes my phone will sing good morning.  Tricia is sound asleep and I am concerned that my movement will steal away her last few moments of rest.  Yet my excitement is running deep. Between a last moment cheetah sighting and a night of photographic dreams, I am wanting this day to begin.

With six minutes to go, I just can’t take it any longer. My feet slowly reach for the floor as I slide so gently out of the bed. I try my very best to keep the noise to a minimum. Last night, the French press coffee pot was my last visit before my head hit the pillow. Two packets of fine African dark roast coffee, rest easy in the guts of a stainless steel plunger. A kettle holding pure water awaits the on switch. I know it will take at least four minutes to fill the room with the roaring sounds of boiling water. That should mean the alarm and the kettle should sing together and I shall remain in perfect harmony with Tricia’s wake up call.

A quick glance across camp as I scan the guest rooms and the main lodge for any sign of life. My eyes make a quick stop at the water hole in front of my cabin. A lone Jackal is also feeling the effects of the desert. A long drink of water and a shady spot under a lone Umbrella Thorn tree will carry him through the day.  Another Beautiful day at Onguma Game reserve in Namibia is about to begin. 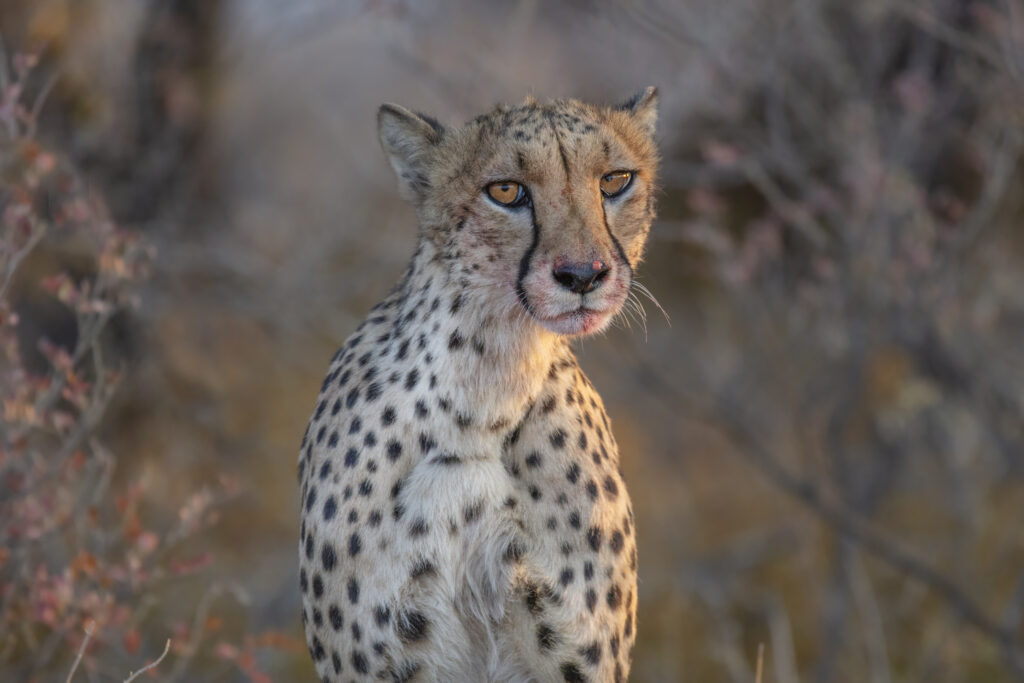 This is no ordinary morning, my blood is running wild with the thoughts of last nights Cheetah sighting.  With years of being a Safari Guide under my belt, I have seen some amazing things in the wild places of Africa. However, every once in a while a blessing will come that simply sticks with you for life.

Yesterday at the edge of darkness, as we traveled the dusty road back to safari camp, we spotted a female cheetah. I do believe the folks in my vehicle were a bit tired and ready for dinner, I know I was.  It had been a full day in the bush, We had some incredible elephant encounters, a lone leopard on a downed tree limb, and some stunning lion sightings.  This last bit of nature would bring us all back to the reality that we were still on a game drive and even at the last minute something amazing can happen.

In all our days success we had no idea that we were about to end our adventure with such a special treat.  This last bit of nature would bring us all back to the reality that we were still on a game drive and even at the last minute something amazing can happen. We spot a cheetah within a mile  from camp. However, this was not just a cheetah sighting, this was the ultimate cheetah sighting. A mother cheetah with five cubs in the range of six weeks of age. Gathered at a carcass of a downed Impala, both the mother and the cubs ate as quickly as they could. The cubs were snarling at each other as they fought over the best pieces of meat. Darkness was quickly approaching and my knowledge of cheetahs told me that they would leave the carcass within a few minutes.  Cheetahs are fast, but they are very agile and remain at the bottom of the hierarchy among the big predators. The smell of blood was in the air and lions and hyenas were most likely en route to take over the kill.

The cheetah mom and her cubs soon left the carcass and headed into the thick brush. I knew the cheetahs would remain hidden throughout the night. Thirst would set in and by morning the cats would be desperate for water. We searched around for the closest water source and made a plan to return before daylight. 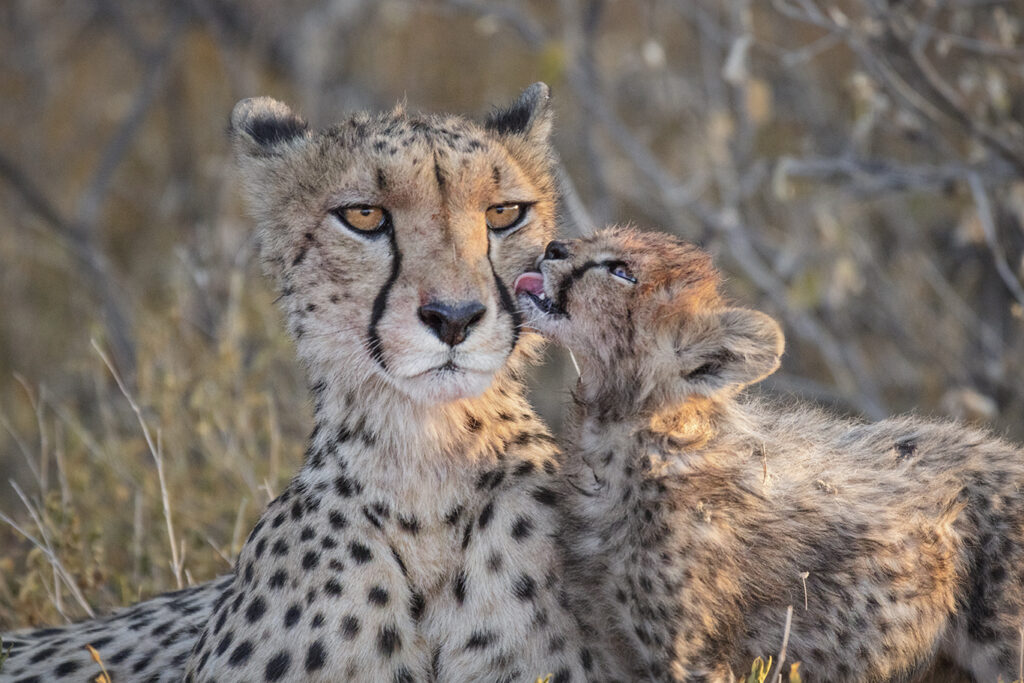 The one sure thing is that dinner in safari camp never disappoints. That was certainly the case this evening, a beautiful three course meal , talk of cheetahs, eyes growing heavy, all followed up by ice cream and the soothing sounds of Africa at night.  A short walk to my comfy cabin would take me past the camp water hole. Two giraffes greet me, our eyes meet, they continue to drink. I enjoy the perfect vision of Africa for a moment, the southern cross stands proudly behind them. It shall be a good night indeed.

As the days add up, I can get tired, my body is fighting the excitement, my eyes want darkness. The hum of the safari vehicle is like a lullaby, the road a rocking chair, the fight is overwhelming. Yet I know I have a shot at this years best image, so I best get myself firing on all cylinders.  It’s just a short fifteen minutes or so to our early morning destination. The sense of wonder is dominating my mind.  Is this the day? 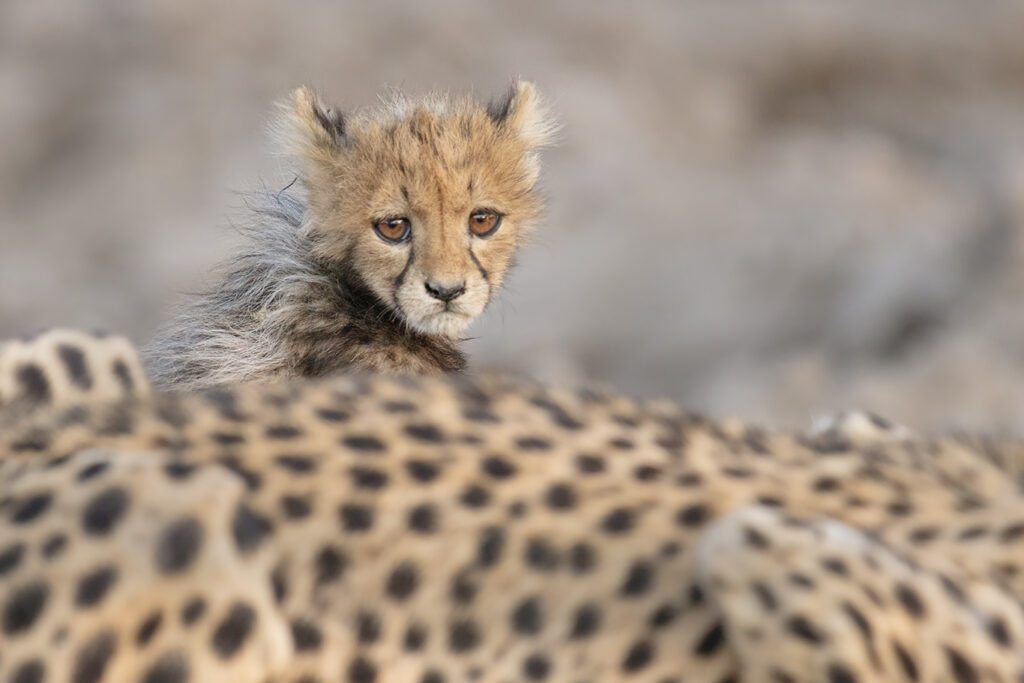 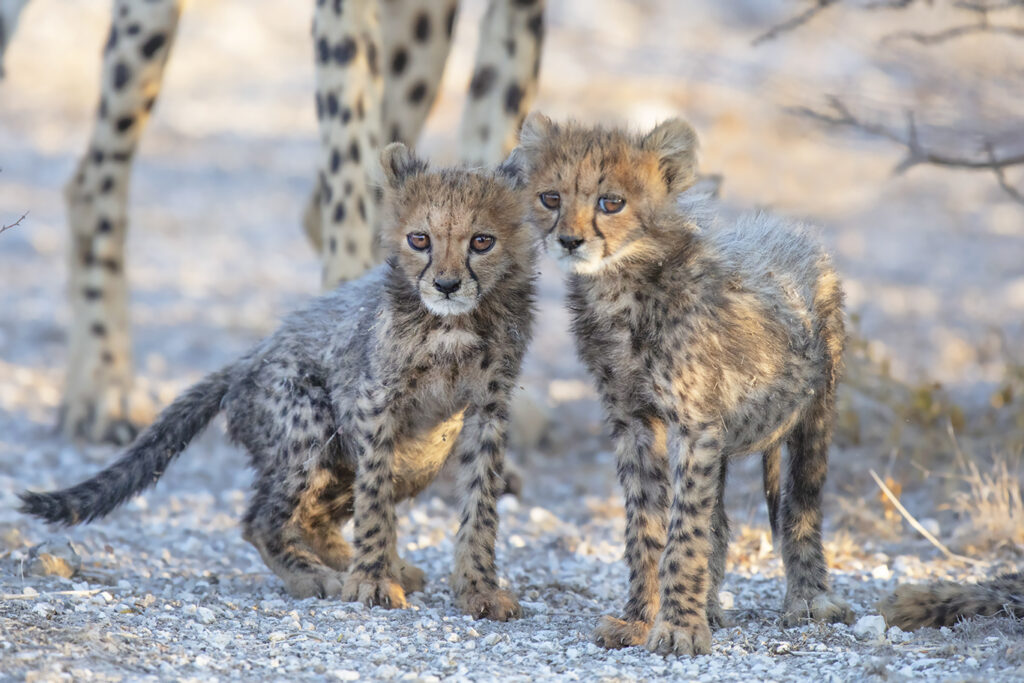 The thick bushes surround the small water hole. The wind is almost quiet, but with some effort I pick up a slight movement in the air from the southeast. This tells me approximately where the cheetahs will approach from. The mother cheetah will want every advantage to spot any danger, she will use the wind to increase her odds of a safe and uneventful visit to the water source. We have mentally pinpointed where we think the cheetah will appear.  We have positioned ourselves for the best opportunity to photograph this new family. The cheetah is endangered, this is not an everyday opportunity, we will wait it out and between an ounce of hope and a pound of prayer it just might all come together.

Daylight to our human eyes will still seem to dim and impossible to create images however, it is a very usable light for the cheetahs. We must hope that she will wait long enough to get enough light for photography. I pump up my ISO, select a usable yet very wide lens opening, and a shutter speed that will be on the edge of stopping the movement of quick kittens. Difficult decisions that will be changing rapidly as the light comes alive. Now to just wait it out.

The feeling of just not knowing if your plan will come to light, lives with an intensity like no other. Any time now the sun and the moon will shake hands and a new day will come. I must admit that some of my best thoughts have come during these times in wait. I love a few moments to drift, to dream, to plan my life, and to celebrate the days gone by. I must remind myself to not let my mind get to far away, any moment could be  the creation of a new memory that will stand tall and stay with me for life. Indeed today will be one of those days where a true gift will come, I simply feel it deep down inside. 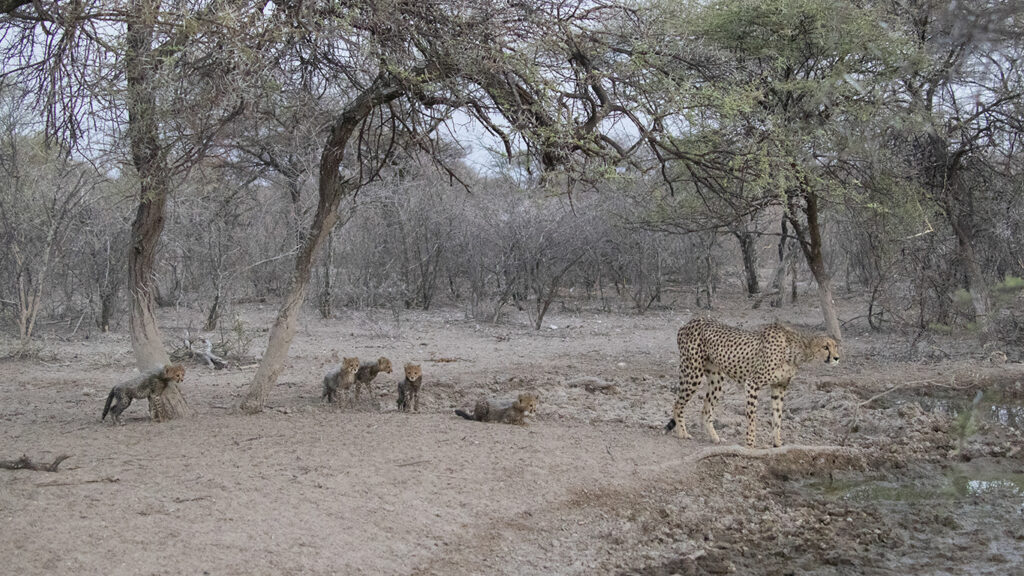 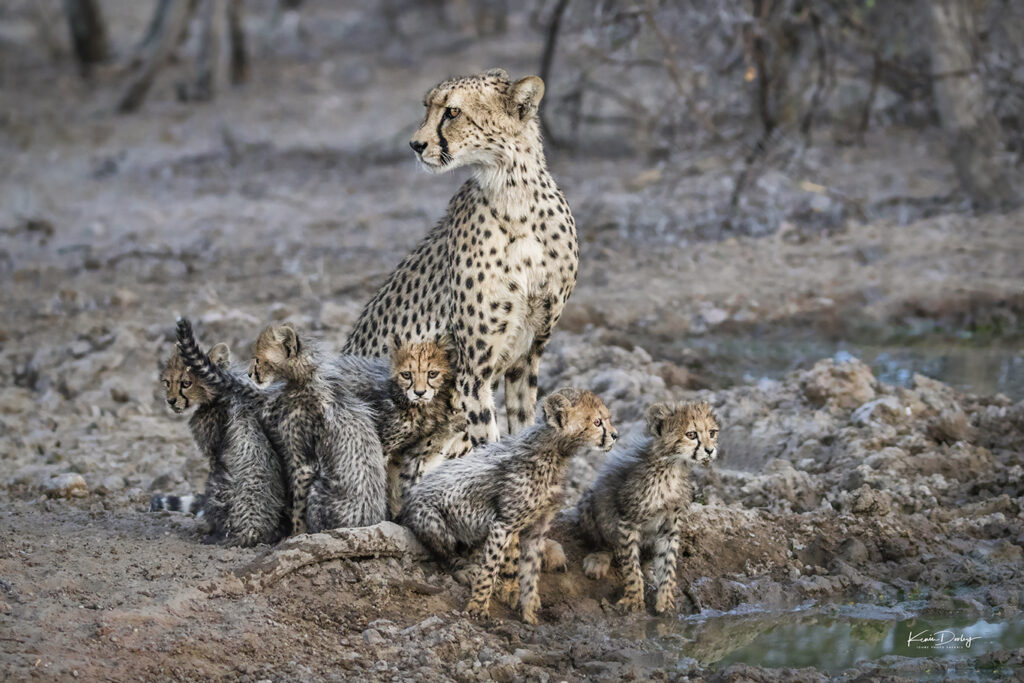 A simple readjustment on camera settings and a test exposure share some good news. I have managed to gain a stop of ISO, digital noise is starting to become a non issue. I pick up a bit of movement to my left, the a slight sway in the Buffalo thorn is a clear indication of something beyond the wind. A nose, eyes, ears, pop out and scan the area for any danger. I whisper a shush to my companions, be ready I say as quietly as possible.  The alert and beautiful cheetah begins her slow and steady way to the edge of the dark green water. The babies pop out one at a time, mimicking moms every step. Stop , scan, move forward, all in unison. Six beautiful cheetahs. I began to steady my camera and get ready to photograph this once in a lifetime wildlife event. I managed to get two images of the cheetahs en route. I had concerns that the sounds of our shutters would alert the cheetahs before they reached the water. I signaled for everyone to hold off till the cheetahs reached the water hole.  We need to first be sure they get the much needed water, that would be our main goal, followed up by photographs.

The mother cheetah stopped at the edge of the water and scanned thoroughly for any danger. A lion, leopard, or hyaena, could be the end for this new family.  Her nose was high in the air sniffing for any sign of danger, her eyes and ears were in top form. Once the mom was satisfied she let her babies know all was 0k. The cubs ran to the water and began to drink. Mom dropped her head over the cubs and protected them as they fulfilled their thirst.  A few test images told me that the cheetahs could not hear our cameras, we began to photograph one of the most amazing events I have witnessed in nature.  The mother cheetah would also drink, however with every couple of licks, she would rescan the area and continue to make sure her cubs were safe.

After a few minutes, the mom gave the signal and led the babies back to the safety of the thick bushes. The silence in our safari vehicle was soon replaced with a celebration of seeing a once in a lifetime wildlife sighting.  We were all in awe of what nature had just shared with us. 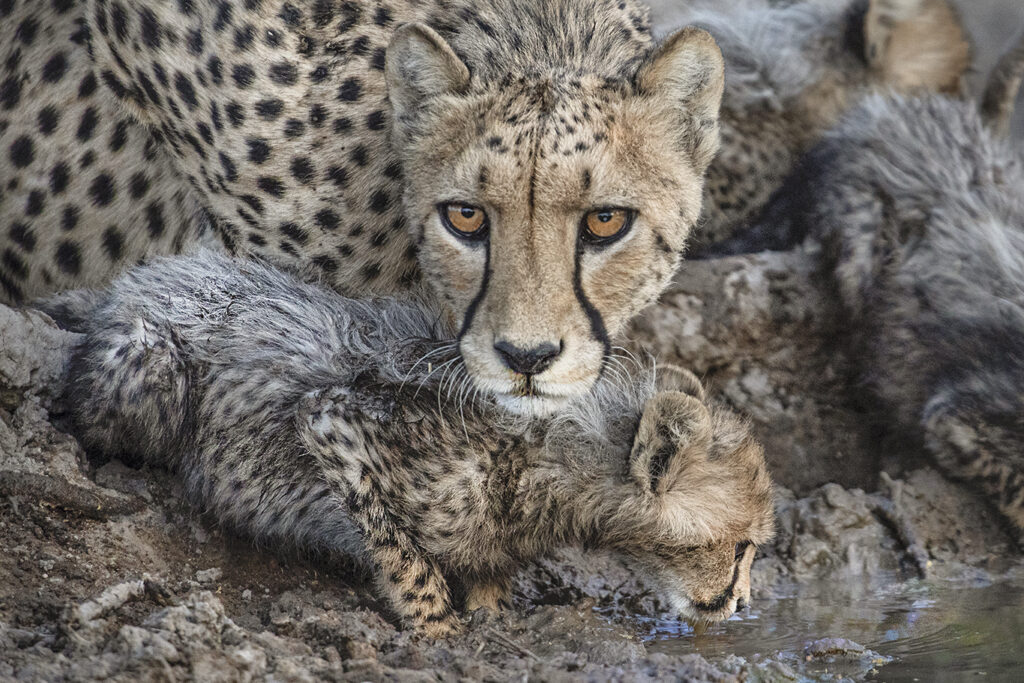 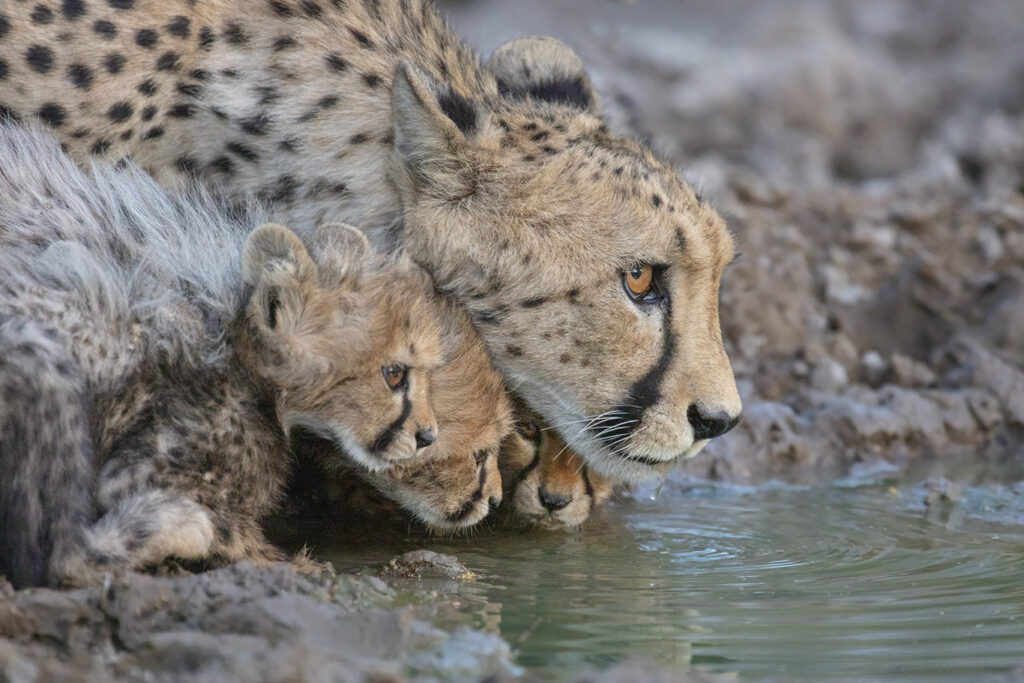 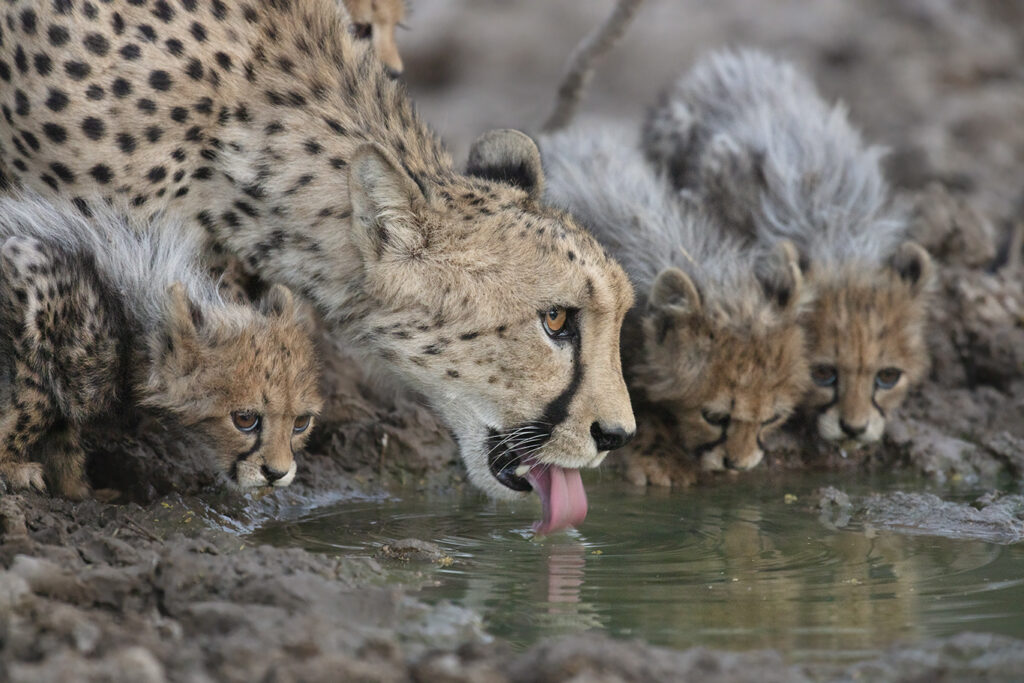 Remembering Cheetahs is  available at Amazon Books and at  https://rememberingwildlife.com/remembering-cheetah